Nursing is in Suzanne Thompson’s blood.

With registered nurses dotting her family tree, it seemed a given she’d join the club at some point.

It was only a matter of time.

Suzanne was named Carson Valley Medical Center’s DAISY Award winner for Spring 2018 in May, emerging from a field of seven finalists.

The award, created by the DAISY (Diseases Attacking the Immune SYstem) Foundation in memory of J. Patrick Barnes, is given by more than 2,700 healthcare facilities in all 50 states and 17 other countries in recognition of extraordinary registered nurses. CVMC began awarding the honor in December of 2017 on a biannual basis.

“I’m just honored, shocked, very grateful,” said Suzanne, who works on the medical-surgical floor at CVMC. “The bottom line is just that it’s a priority to me to treat my patients like people first — like I would my family or my friends.”

“When we are seeing people, it is a stressful time for the patient and the family. Nobody wants their loved one to be in that situation. I try to reach out to them at the level of what they are going through. I want to get to know something about them and let them know I care.”

It’s something that came up specifically in her nomination letter, written by a CVMC patient who had been in the hospital’s care for 18 days last November.

“What an exceptional nurse,” the patient wrote. “She made my hospital stay bearable. She was so professional and compassionate. She made me feel well taken-care of. She talked to ME — explained everything that was going on. Every time I asked for something, she was right there.”

The patient went on to compliment the entire staff, but said Suzanne stood out with her humor, good nature and attentiveness.

Suzanne started her prerequisites for nursing in her early 20s.

“Then, you know, life just kind of happened,” she said. “My husband and I had children, and for me it was more important to be there for their childhood.”

Twelve years later, when her youngest started kindergarten, Suzanne went back to school as well.

“I just started with general education and worked my way into the nursing program at Western Nevada College,” she said.

She graduated, worked for Gardnerville Health & Rehabilitation and then joined Carson Valley Medical Center in 2015.

“It’s just something I’d wanted to do for a long time,” she said. “I come from a family full of nurses. My dad left a job in accounting in his 40s to go back to school and become a nurse. We just care for people. That’s who we are. For me, it was the right time to go back.”

Fittingly, her husband, children (Claire, 20, currently finishing up her nursing prerequisites; Sam, 18, graduating from Douglas High School and set to serve in the U.S. Navy; and Sidney, 14) and family were at the DAISY Award ceremony, hiding off to the side until Suzanne was announced as the winner. 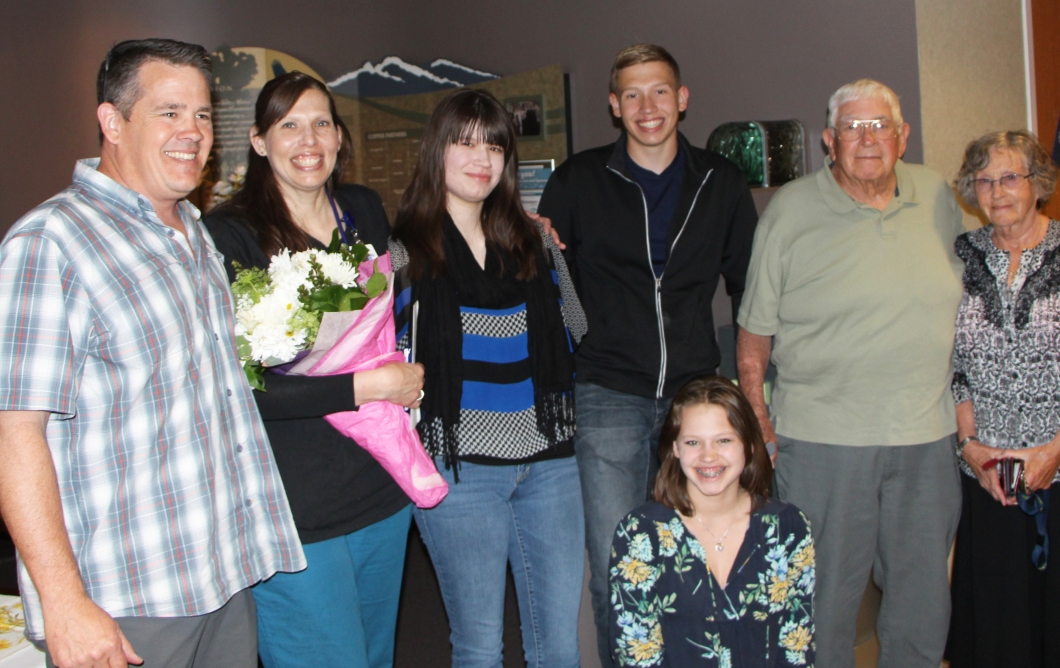 Suzanne has also since had a chance to meet with the nominating patient and his wife.

“They just thanked me for taking care of him,” she said, “They are really good people. I tried to treat him like him and not like he was sick and that resonated with them.”

The DAISY Foundation was established by the family of J. Patrick Barnes after he died from complications of the auto-immune disease ITP in 1999. During his hospitalization, the family was struck by the care and compassion shown to Patrick and the entire family. In response, they started the foundation as a way to say “thank you” to nurses around the world in a public way.

For more information on the award, or to nominate nurses from Carson Valley Medical Center, visit www.cvmchospital.org/daisy.